What is a Special Rates Variation?
What level of rate rise is council considering?
Why is Council considering making an application for a rate rise?
How can I have my say?
How do my rates compare with neighbouring councils?
How can I estimate what impact an SRV would have on my rates?
Wasn't an SRV approved previously?
What other measures have been taken?
What consultation has already been undertaken?
What does a change to the assumed rate-peg mean?
What if I have difficulty paying?
How would money from and SRV be spent?
If there is no SRV, what would happen with my rates?
What happens if there is no SRV?
What would be the impact of an SRV on average ordinary rates?

What is a Special Rates Variation?

Each year the NSW Government, through its rate-pegging policy, determines the percentage figure by which councils can increase their general rate income. If councils want to apply for a larger increase they need to make a Special Rates Variation application.

What level of rate rise is council considering?

Council is considering applying for a Special Rates Variation of 8% a year for three years (cumulative total of 25.97%).  The first 8% increase would be introduced in 2018/19 with 8% increases again in the 2019/20 and 2020/21 financial years. The increase would be retained permanently in Council's rate base.

Why is Council considering making an application for a rate rise?

Council has to achieve a balanced general fund net operating result (before capital grants and capital contributions) by 2020/21 to meet the NSW Government’s Fit for the Future Operating Performance Ratio benchmark.
To do this Council must eliminate the general fund 2017/18 budget deficit of $15.3m (inclusive of depreciation) by 2020/21.As part of moves to reach that target, in June this year Council adopted a four-year plan that included a range of improvement strategies (savings measures) that increase each year from 2017/18, reaching $8.6 million in 2020/21.
This involves reducing our costs and contributions to some services and increasing charges for others. We’ve cut employee numbers by 27 this year – one executive, three managers and 23 other positions.
These measures still leave the organisation short of the target of a balanced General Fund Net Operating Result by 2020/21.
If Council is to proceed without the proposed SRV further cuts to services would be needed.
In May and June this year Council went to the community with options to make additional savings that might avoid the need for a Special Rates Variation, but there was general agreement those measures would potentially cause substantial damage to the social fabric of our community and result in the closure of many valued Council assets.
For Council to be financially sustainable in the long term it must achieve at least a break-even result in its general fund.
If Council does not get to that position it will not be able to undertake the timely renewals of essential infrastructure like roads, bridges, sporting fields, playgrounds and community facilities.
They would deteriorate and could potentially fail.

How can I have my say?

You can write to Council by emailing council@clarence.nsw.gov.au by post to Locked Bag 23 Grafton NSW 2460.
We will have community information sessions from 5.30-7.30pm at:
top of the page

How do my rates compare with neighbouring councils?

How can I estimate what impact an SRV would have on my rates?

To estimate the impact of an 8% Special Rates Variation each year for three years from 2018/19 (cumulative impact 25.97%) on your property, simply go to our rates estimator and put in your property number.

Yes, but it was for one year only and has now been removed.
In May 2016 the Independent Pricing and Regulatory Tribunal, which determines the amount councils can charge for rates, approved a one-off rate increase for the 2016/17 financial year for Clarence Valley through a Special Rates Variation of 6.5%. That was 4.7% above the State Government’s rate-peg limit which, that year, was 1.8%. Council accepted that approval and, for the 2016/17 financial year, ordinary rates rose by 6.5%.
That increase was for one year only, so at the end of 2016/17 financial year, 4.7% of the increase (the amount above the allowable rate-peg amount) was removed from the ordinary rate.
If Council applies for a Special Rates Variation of 8% a year (inclusive of an assumed 2.5% rate peg per year) for three years from 2018/19 it would mean ordinary rates charges would go up by 8% each year until 2020/21, with a cumulative increase in ordinary rates of 25.97% (inclusive of an assumed rate peg).  The 25.97% increase by 2020/21 would be retained into the future.
top of the page

What other measures have been taken?

Council needs to find $15.3 million through savings, additional revenue measures or a combination of both by 2020/21 to meet the NSW Government’s Fit for the Future Operating Performance Ratio benchmark of a greater than or equal to breakeven general fund net operating result. Council has already adopted improvement strategies that provide savings of $8.6 million in 2020/21.

These are being achieved through either reducing or eliminating some existing programs, reducing the number of middle managers and other staff reductions - the equivalent of a reduction of 27 staff from the organisational structure in that time.

Some of the other savings measures, which will be delivered over four years from 2017/18, include:

Cost savings resulting from the new centralised Grafton depot that is due to be operating early 2018;

Improved work practices in relation to delivery of infrastructure services, including roads and open spaces;

If adopted, such an SRV would add $10.1 million above the rate peg by 2020/21. These funds would be used first to achieve a balanced General Fund net operating result and later to meet the funding ratio gaps for asset renewal and asset maintenance.

What consultation has already been undertaken?

Community roundtable discussions were also held in Iluka, Yamba, Maclean and Grafton. These consultations were based on a possible Special Rates Variation of 8% a year for three years inclusive of on an assumed rate peg of 2%. This assumption was made on the basis that this was the average rate peg over the past four years.

However, in discussions with representatives from the Independent Pricing and Regulatory Tribunal (IPART) Council was advised that in order to satisfy the requirements for the 2018/19 Special Rate Variation (SRV) application the assumed rate peg should be 2.5% from 2018/19 onwards, so additional consultation needs to be undertaken using IPART’s assumed rate peg of 2.5%.

What does a change to the assumed rate-peg mean?

Council is considering applying for a Special Rates Variation of 8% a year for three years from 2018/19 - 2020/21 (cumulative total of 25.97%).  That 8% includes an assumed 2.5% rate-peg amount allowed by the State Government. The rate peg announcement for 2018/19 by IPART is expected in late November 2017. At this stage it is anticipated Council may still require the cumulative increase of 25.97% (inclusive of rate peg) in general (ordinary) rates from a SRV starting 2018/19 to 2020/21 to be retained permanently in Council’s rate base.

However, should the actual rate peg for 2018/19 be less than the assumed 2.5% the impact of this change will be updated in Council’s Long Term Financial Plan/Delivery Plan/Asset Management Strategy and these updated documents will be reported to the community and presented to Council’s December 2017 meeting.

Council will be required to notify IPART in December 2017 whether it intends to apply for a Special Rate Variation.

What if I have difficulty paying?

Council recognises there are genuine cases of financial hardship that might result in people having difficulty paying their rates on time.

Copies of Council’s rates hardship policy and an application form are available www.clarence.nsw.gov.au or can be obtained from our offices in Grafton and Maclean or by phoning 6643 0200.

How would money from and SRV be spent?

Over this period, $1.4 million will also be transferred to an asset renewal reserve. This reserve will be consumed by 2023-24 as part of the renewals program for road pavements and surfacing to align with optimal renewal cycles.

If there is no SRV, what would happen with my rates?

If a Special Rates Variation is not adopted, it is anticipated that in most rating categories ordinary rates will rise by 2.5% a year (the assumed rate-peg) or a cumulative total percentage increase of 7.69% by 2020/21.

If a Special Rates Variation is adopted, it is anticipated that in most rating categories ordinary rates will rise by 8% a year (which includes the rate-peg amount) or a cumulative total of 25.97% by 2020/21.

What happens if there is no SRV?

The rate peg only option is not financially sustainable in the long term as it will mean infrastructure renewals aren’t performed when required thereby generating a backlog of renewal works. With the ageing infrastructure, asset conditions will deteriorate which significantly increases levels of risk and potential of failure. Levels of service will have to decrease to sustain available funding.

Without an SRV, Council would fail to meet the State Government’s Fit For the Future operating performance ratio benchmark by 2020/21 as required.

What would be the impact of an SRV on average ordinary rates?

The table below shows Indicative Special Rates Variation - Ratepayer impact of scenario 1 and scenario 2 of the revised 2017/18 to 2026/27 Long Term Financial Plan - where average rate is based on estimated yield for 2017/18.

SCENARIO ONE: Base case, no Special Rates Variation (assumed rate-peg of 2.5% per annum only) 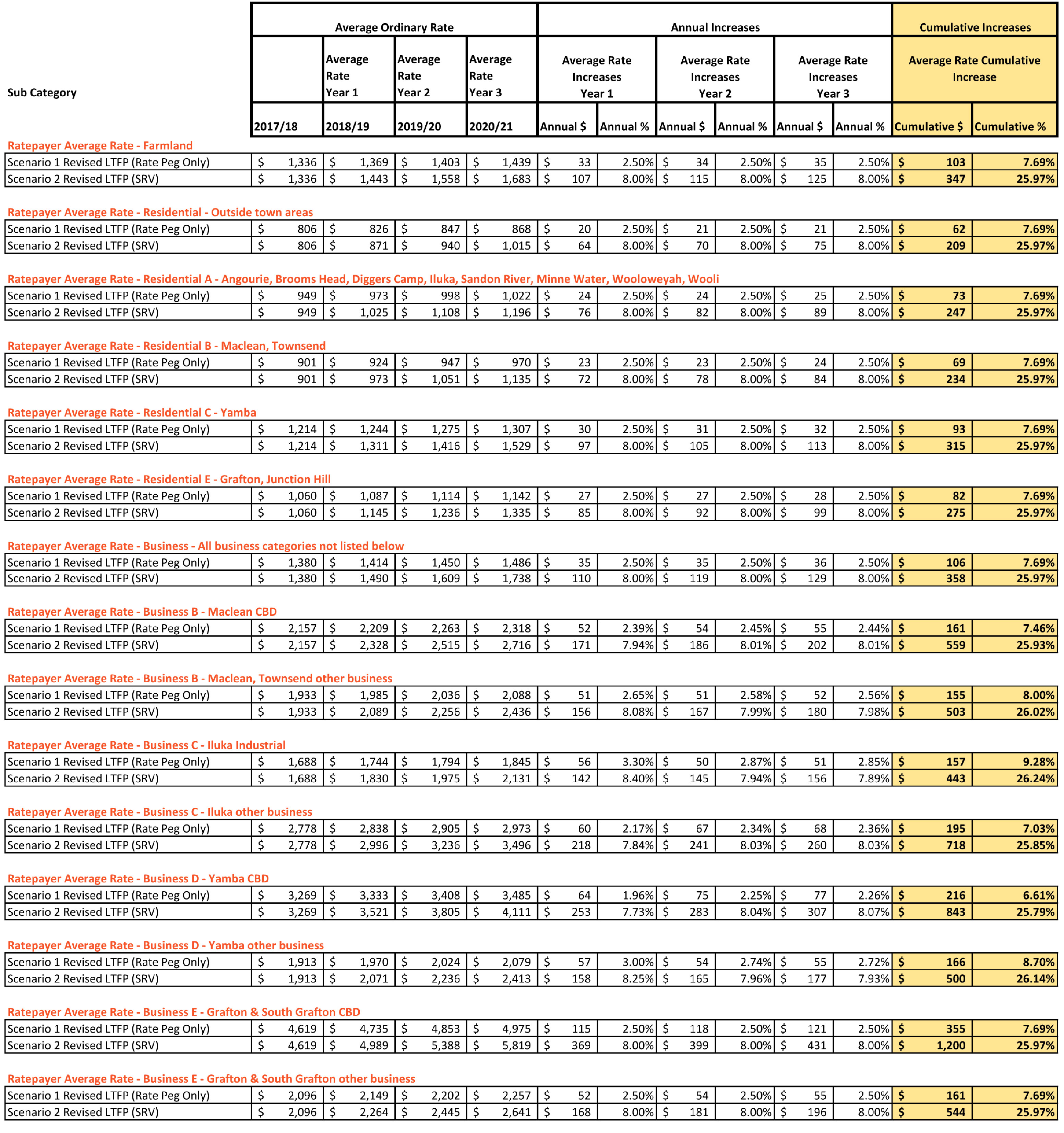